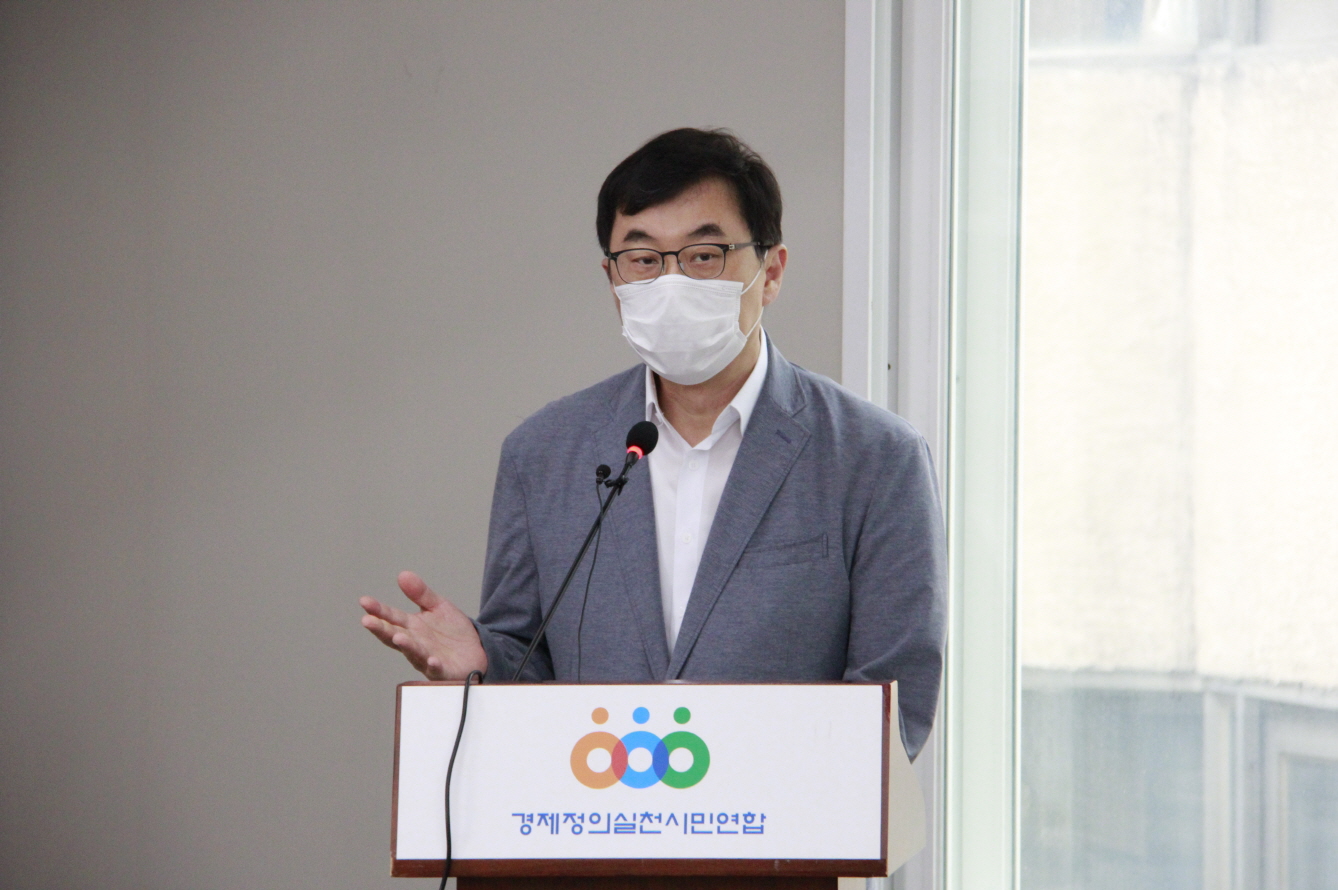 Yang Moon Soo, chair of the Economic Cooperation Standing Committee, said in his opening speech that “although inter-Korean relations still remain in a long, dark tunnel, there is now a bigger room for improvement of inter-Korean relations since last month’s South Korea-U.S. summit achieved good results.” He revealed the purpose of the academic conference by saying that “because South Korea has a bigger room for maneuver, it needs to observe the current situation and discuss and think about how to respond. Yang also said that North Korea held the Eighth Party Congress and a plenary session in February and that it draws keen attention to whether the North will use the meetings to send a message to either South Korea or the United States. In that sense, I think today's academic conference will give a time to make meaningful discussions about a timely topic.” 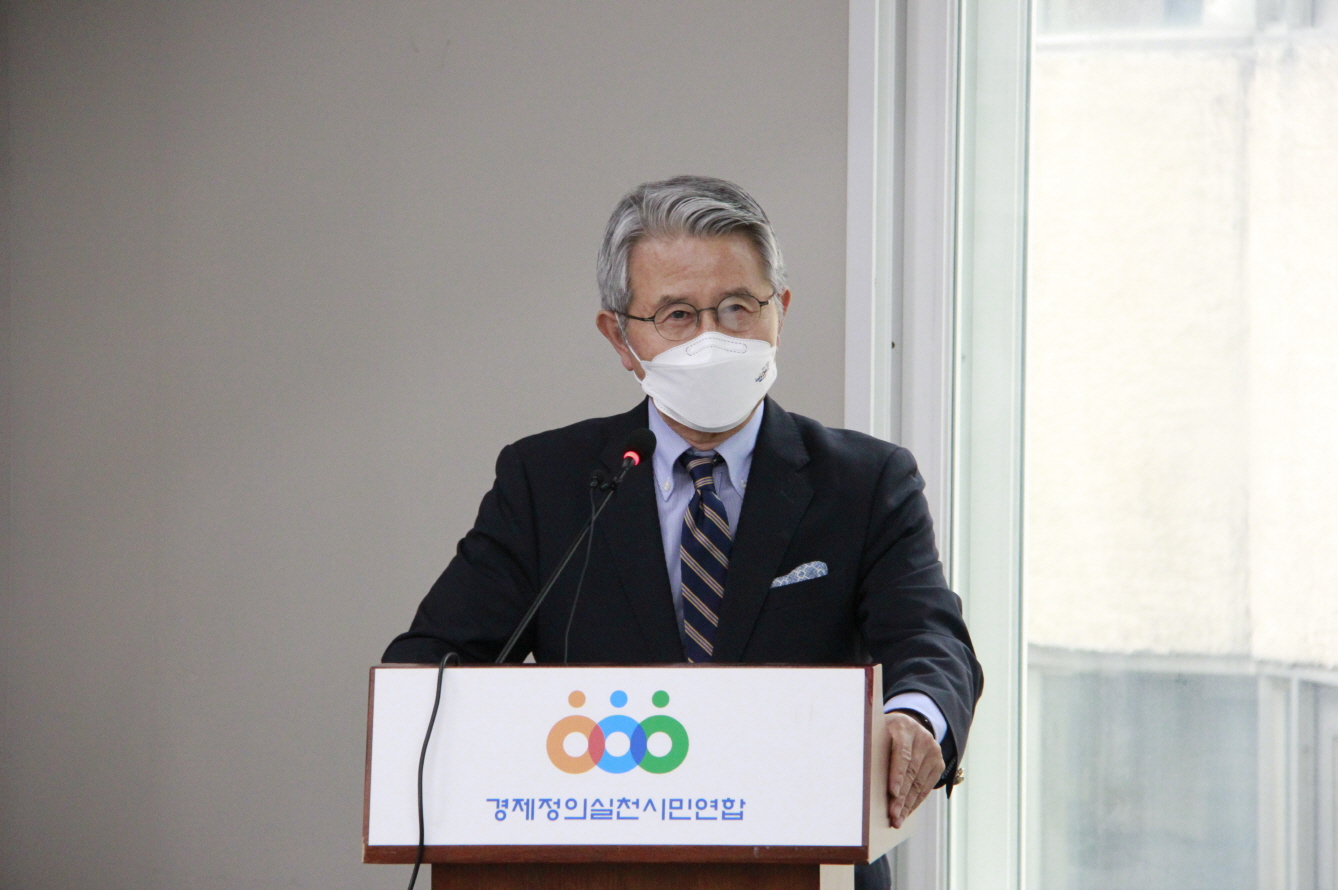 Choi Wan Kyu, head of the Unification Association of the Citizens’ Coalition for Economic Justice, delivered the warm and cheerful message in his welcoming speech that “I believe that a great discovery means a new interpretation of a land that had already been discovered rather than discovering a new one. Peace and prosperity on the Korean Peninsula will also depend on whether we will be able to understand and cope with the given conditions with a new perspective and insight, rather than discovering something new. I hope today’s conference will look for ways to improve inter-Korean relations based on such a perspective.” 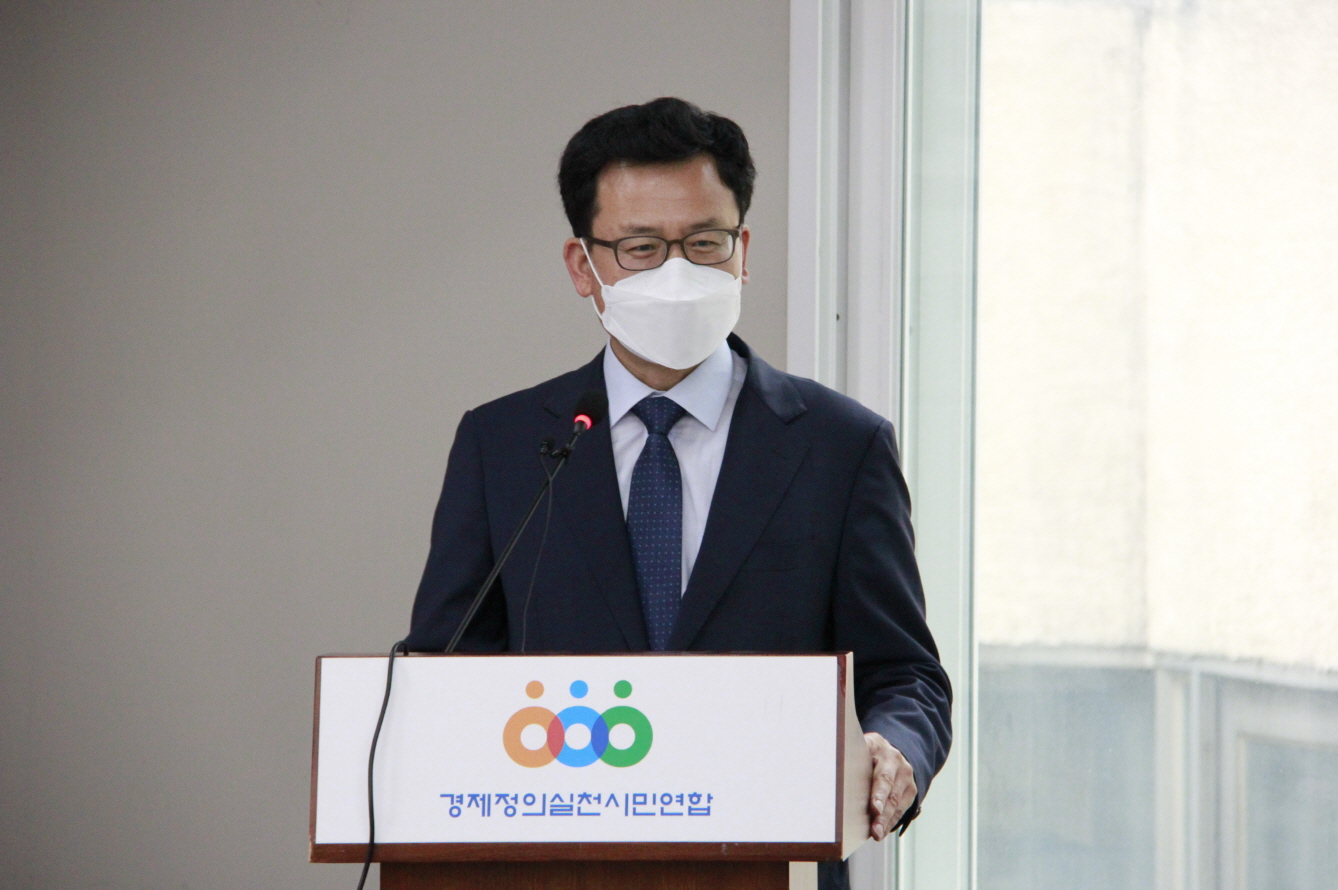 The first session of the conference, which was hosted by Lee Woo Young, a professor at the University of North Korean Studies, had the theme of ‘Changes in North Korean Social Policy and Prospect of Inter-Korean Relations.’ 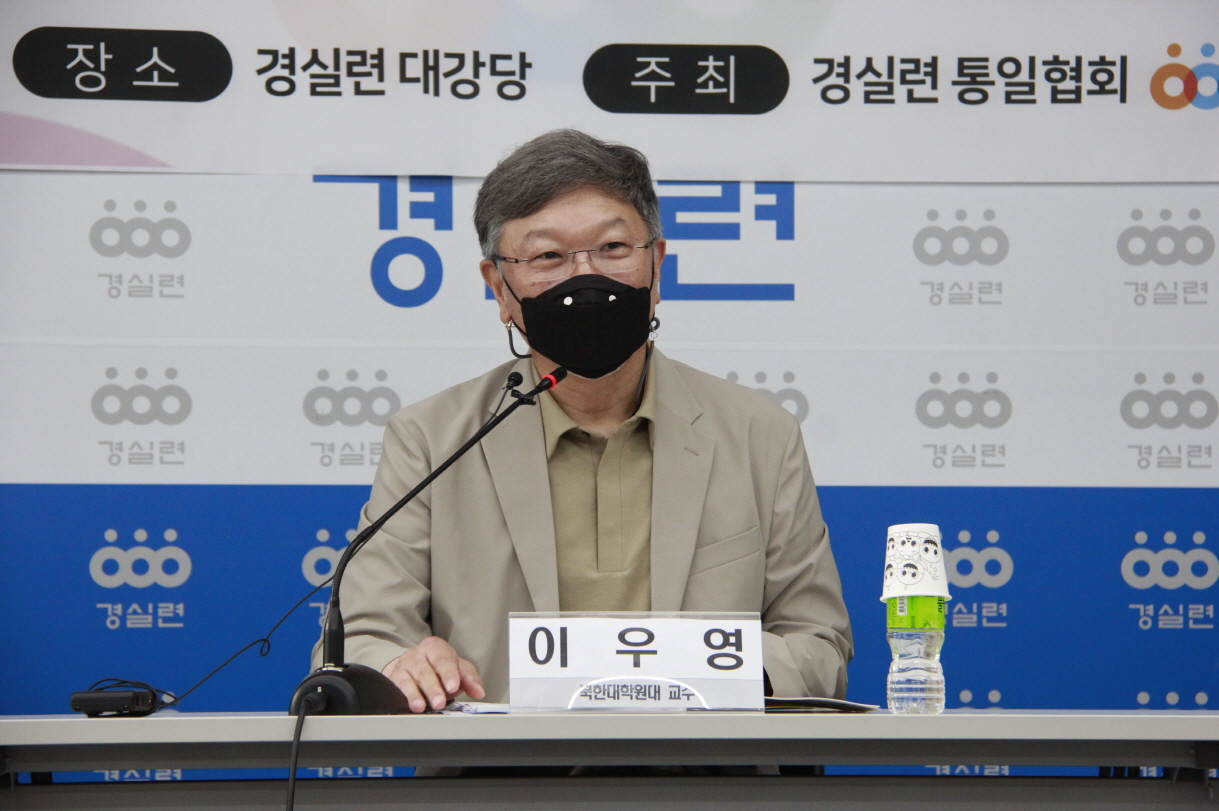 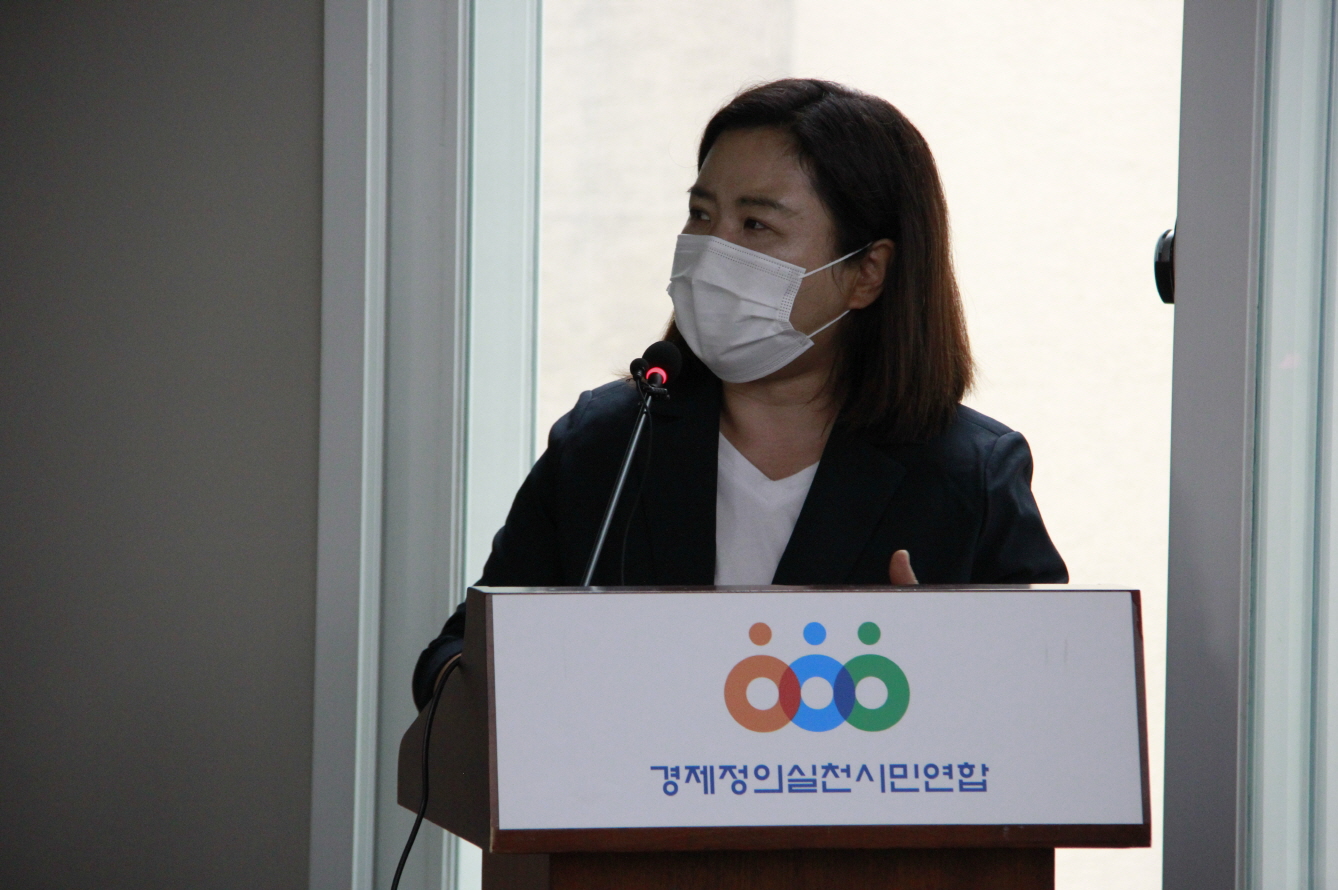 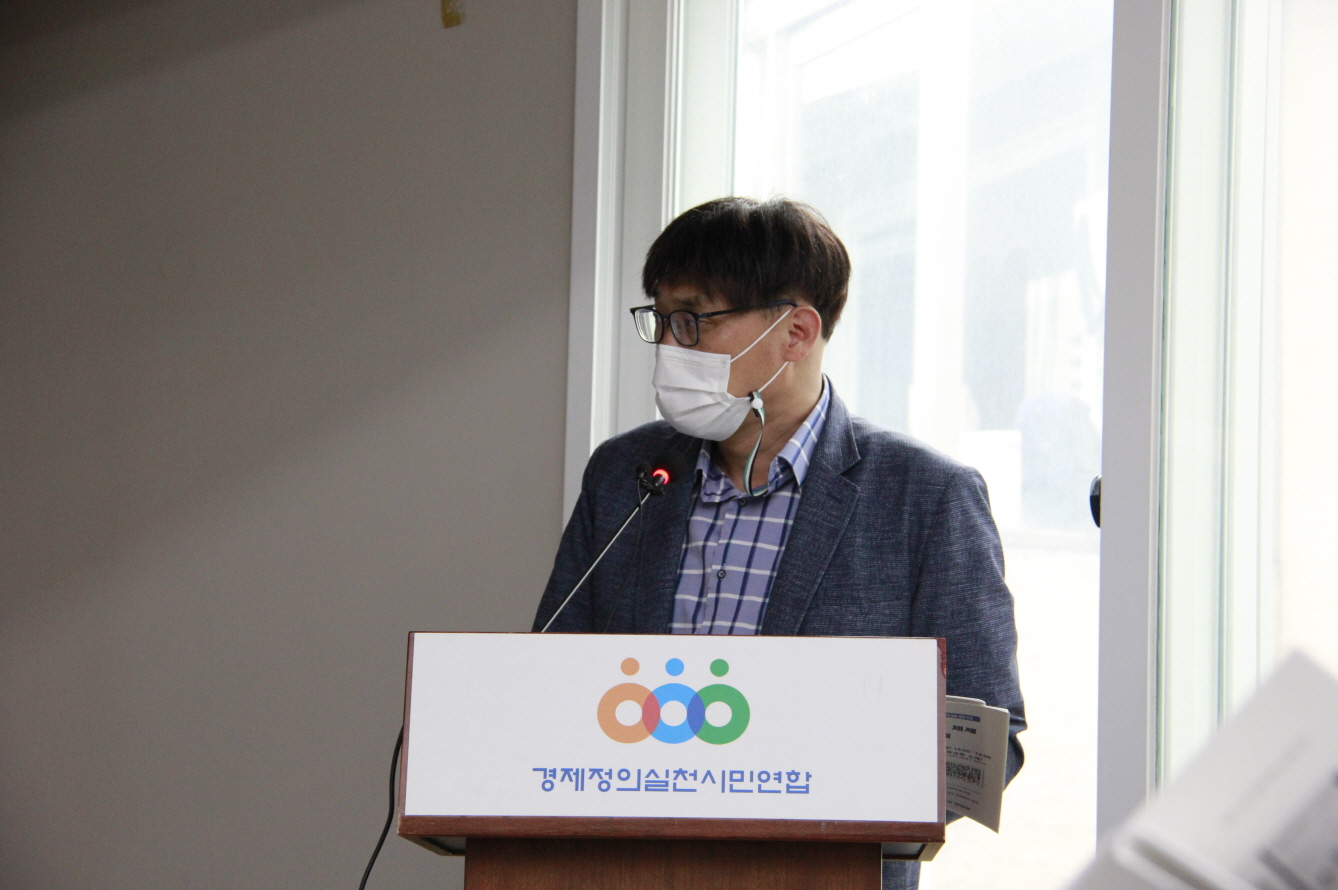 Park Young Ja of the Korea Institute for National Unification, said that “through the Eighth Party Congress, North Korea announced a mid- to long-term approach to negotiations and also the two major strategies of developing high-tech strategic weapons and achieving self-rehabilitation.” Park also noted that “North Korea is stepping up control of the entire society, including the party organizations and party officers, while proclaiming austerity and purification along with an ideology speed battle.” Regarding the impact of North Korea’s social control on its society, Park, while noting that “it will be difficult to see organized resistance due to the continuing control such as the guilt-by-association system,” opined that “there is a possibility that resistance for survival by the low-class people suffering from hunger may emerge.” 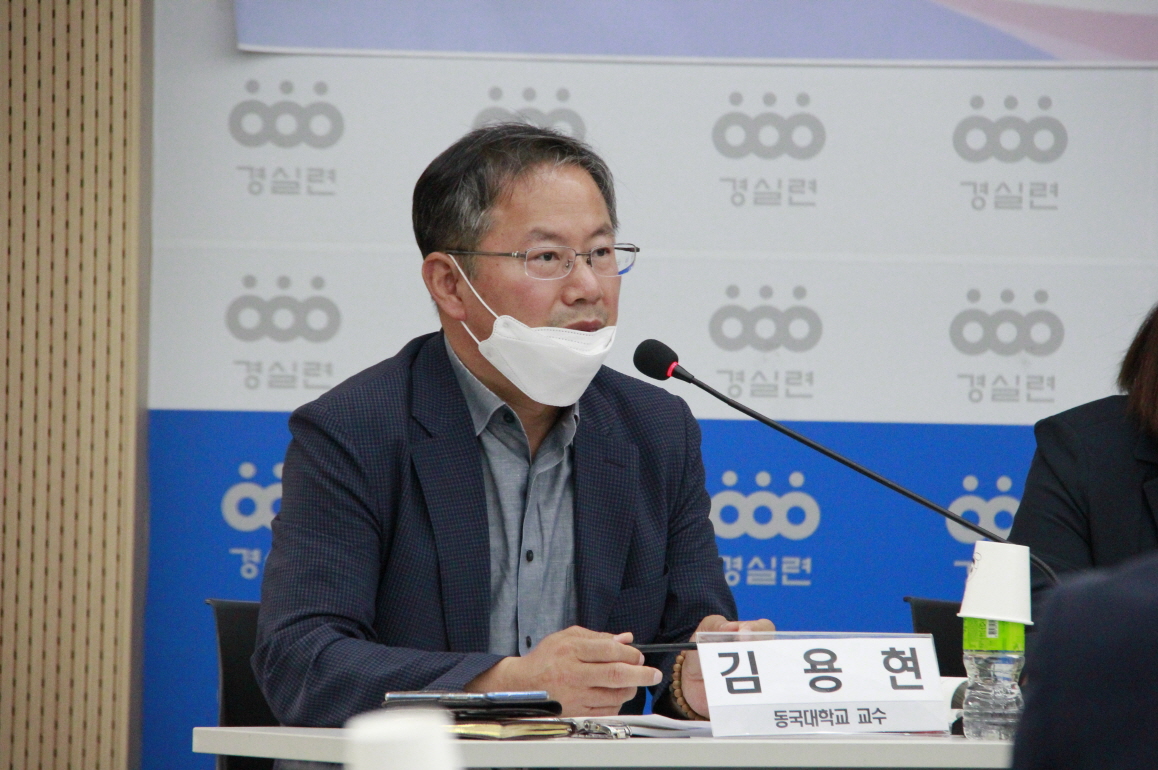 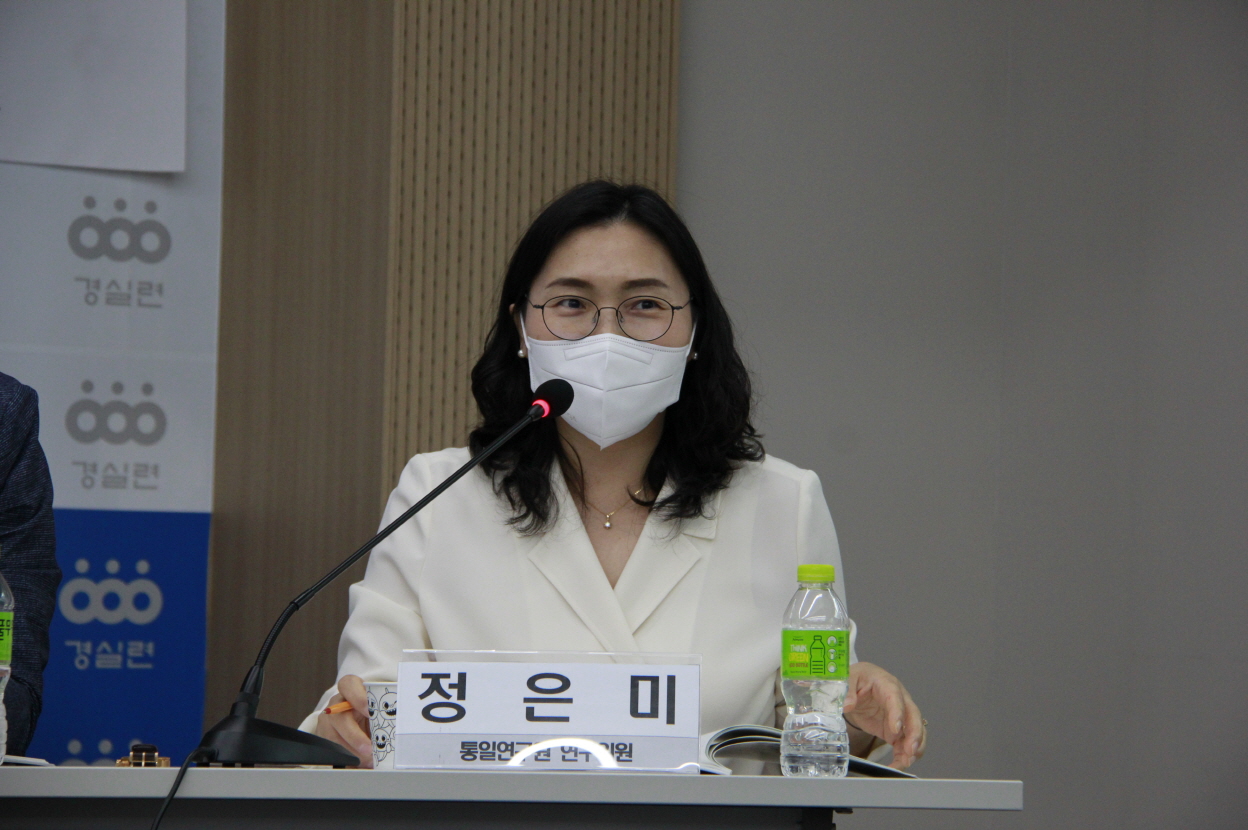 Professor Kim Yong Hyun of Dongguk University who participated as a panelist said that “North Korea has not yet worked out its foreign and domestic strategies since the Eighth Party Congress and predicted that it will set the direction of its strategy towards the U.S. and South Korea after the Biden administration works out its policy on the Korean Peninsula and North Korea.”

Chung Eun Mi, a research fellow at the Korea Institute for National Unification, said that “since the breakdown of the Hanoi talks, North Korea has decentralized responsibilities to ease the burden of failure.” Chung also said “North Korea is refraining from excessive pursuit of personality cult and idolization and has strengthened the statehood by emphasizing ‘National First Policy.’”

The second session was moderated by Professor Yang Moon Soo of the University of North Korean Studies under the theme of ‘Changes in North Korea's Economic Policy and Tasks for Inter-Korean Economic Cooperation.’

Kim Il Han, a researcher at Dongguk University's DMZ Peace Center, and Tak Yong Dal, a senior researcher at the Korea Asset Management Corporation, made a presentation on ‘changes in North Korea's economic policy and prospects and tasks,’ and ‘implementation of inter-Korean agreements and tasks for institutionalization,’ respectively. Chung In Young, a research professor at Sogang University’s Social Sciences Research Institute, and Kim Il Yong, an executive of the Korean Peninsula Peace Economy Forum, participated as panelists. 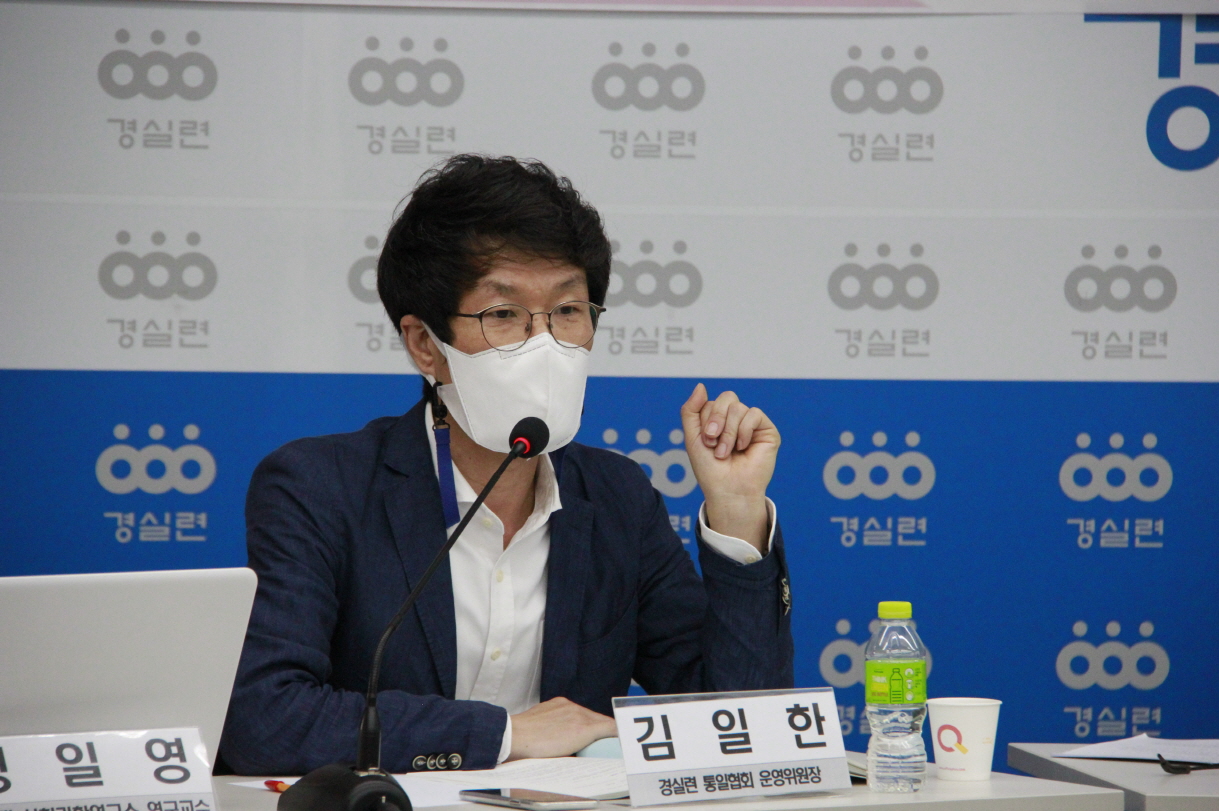 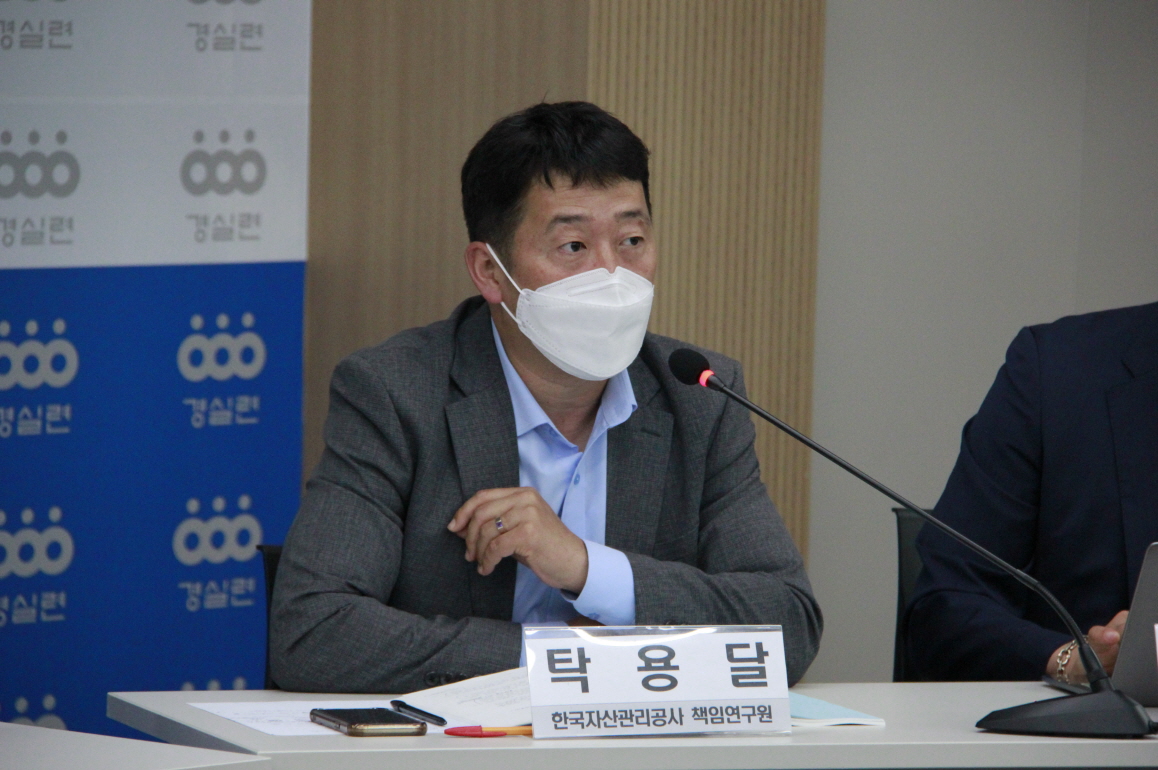 Kim Il Han, a researcher at Dongguk University's DMZ Peace Center, said that “Chairman Kim Jong-un declared an arduous march and struggle against non-socialism and anti-socialism in response to the economic crisis, emphasized people-first policy and strengthened inner control as part of a strategy to normalize the nation.”

Speaking about the changes in North Korea’s economic policy since the Eighth Party Congress, the researcher said that “North Korea implemented a Kim Jong-un-style governance reform to combine vertical rule and horizontal cooperative governing. Regarding the market, North Korea is pushing for the government-led plan and has strengthened private autonomy at the corporate and national economy levels.” The researcher said that “the self-rehabilitation of the Kim Jong-un regime is an inevitable option under the prolonged sanctions and that if the North Korea-U.S. negotiations drag on and the Kim Jong-un-style management of crisis ends in failure, North Korea may go back to ‘the military-first policy.’ Therefore, the role of South Korea as a mediator is important.” 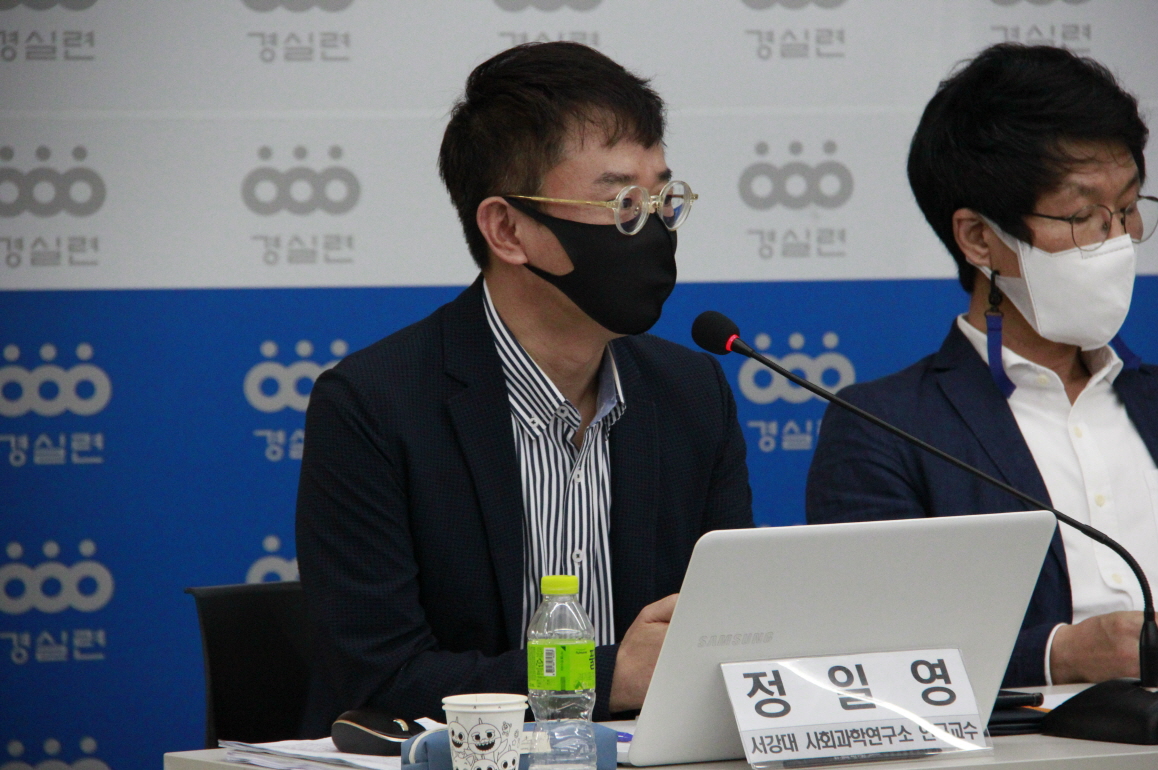 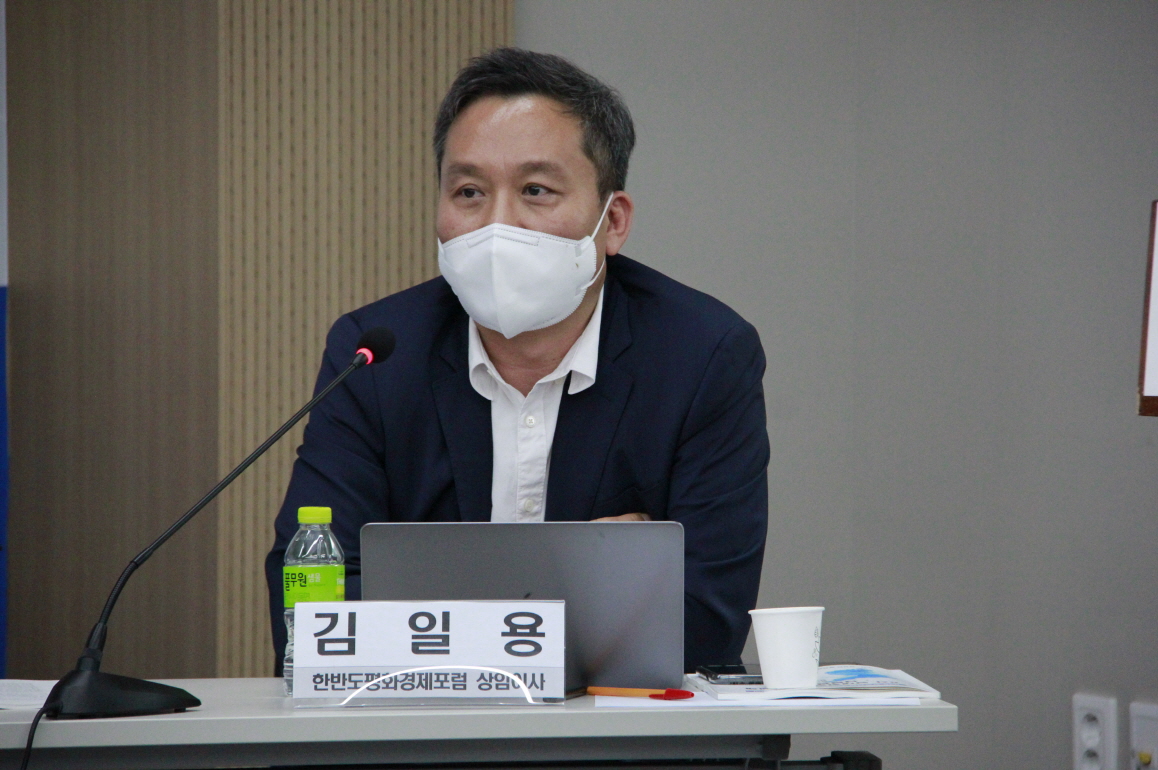 Professor Chung Il Young, who participated as a panelist, said that he agrees with the opinion that “inter-Korean relations should be improved and economic cooperation projects should be promoted to achieve a balanced development of the national economy. The relevant complementary institutions are important.”

Kim Il Yong, executive of the Korean Peninsula Peace and Economic Forum, said that “related legal codes and institutions should be improved so that inter-Korean exchanges and cooperation projects can move toward the goal of achieving peace and co-prosperity on the Korean Peninsula. It is important to remove uncertainty in the projects and enhance transparency.” Kim added that “the South Korean government should stay a distance from the framework of inter-Korean relations centered on politics and security and pursue inter-Korean economic cooperation projects and that the government should strengthen public-private governance by establishing partnerships with the private sector rather than control and supervision.”

The conference, which was broadcast live on YouTube, gave a meaningful time to discuss tasks for improving inter-Korean relations on the occasion of the 21st anniversary of the June 15 Joint Declaration.

※ The full contents of the academic conference are available on YouTube https://youtu.be/BkQMG3sQOuM