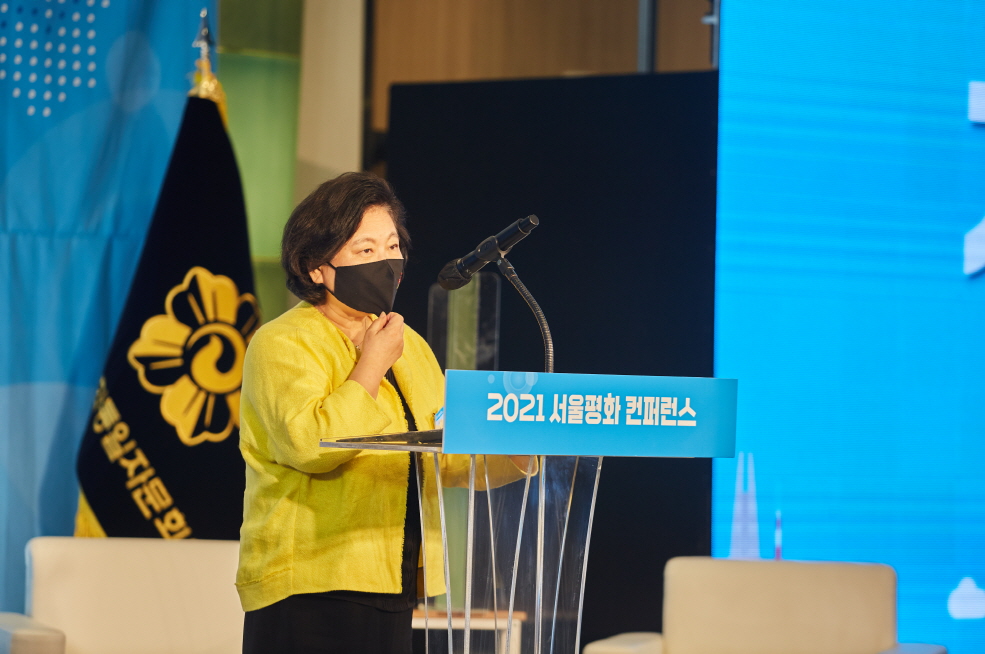 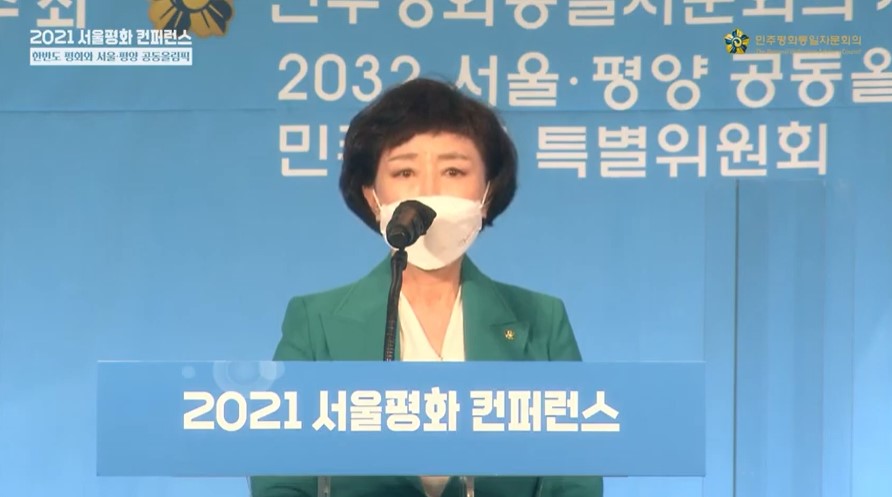 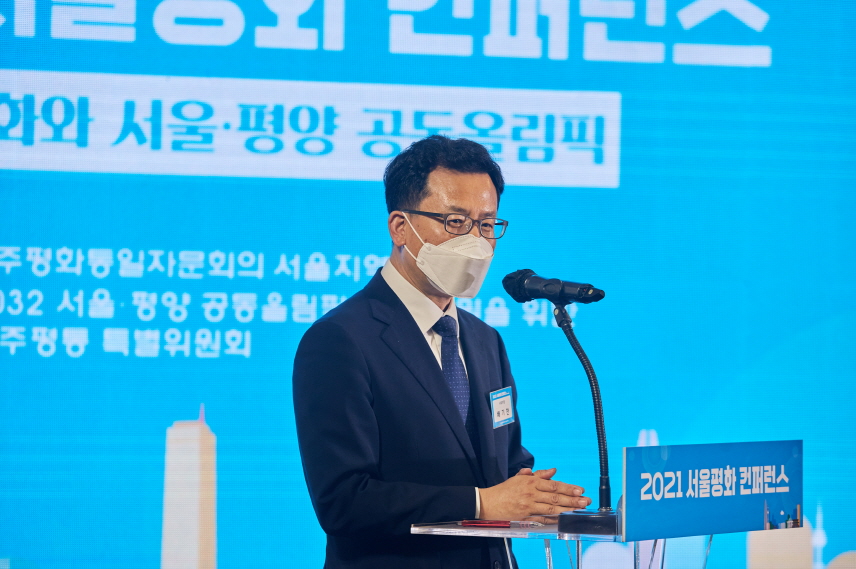 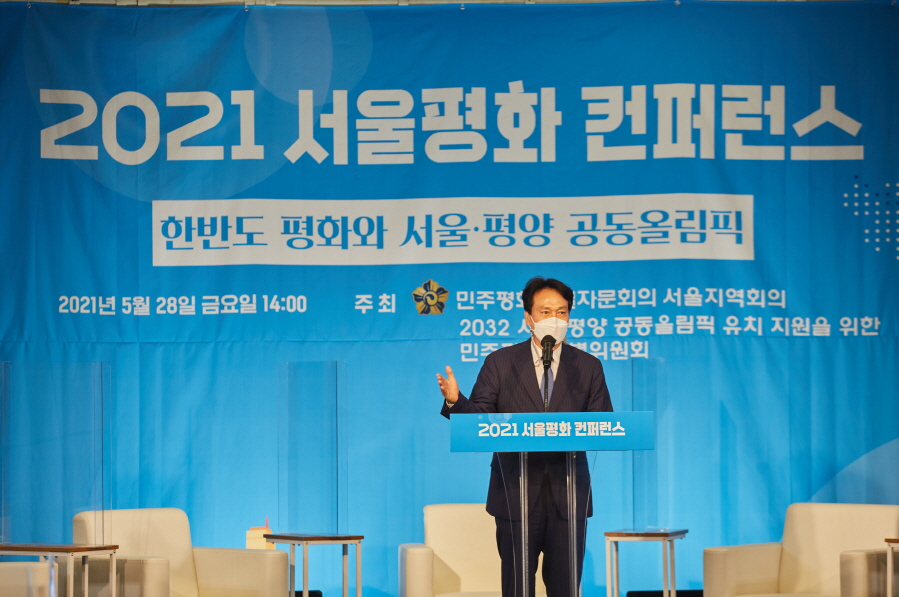 The conference, held under the theme of Peace on the Korean Peninsula and the Seoul-Pyongyang Joint Olympics, took place at the Emerald Hall of Swiss Grand Hotel from 2 p.m. on May 28 (Friday). Park Soo Il, Secretary-General of the Seoul Assembly, moderated the conference, which drew 50 people, including the heads of local chapters in Seoul and members of the NUAC 2032 Special Committee. It was broadcast live on YouTube.


The conference proceeded in the order of a keynote speech by NUAC Executive Vice-Chair Jeong Se Hyun, keynote presentations and discussions on the two themes – ▲Prospect of hosting the 2032 Seoul-Pyongyang Joint Olympics, and ▲Tokyo Olympics, Beijing Olympics and peace on the Korean Peninsula.”


Seoul Assembly Vice-Chair Hyun Jeong Eun said in her opening address that she hopes that “the conference will provide a meaningful occasion to discuss measures to promote peace on the Korean Peninsula through sports diplomacy.” Jang Young Ran, Chair of the 2032 Special Committee, said that “the selection of Brisbane, Australia, as a preferred candidate city has lowered the chance for Korea but added that efforts will continue to be made to host the joint Olympics since it is a key project for peace on the Korean Peninsula agreed in the Pyongyang Joint Declaration.”


Secretary-General Bae Ki Chan said that “just as the 1988 Seoul Olympics became a symbol of the end of the Cold War and the 2018 PyeongChang Olympics highlighted peace on the Korean Peninsula, the 2032 Seoul-Pyongyang Joint Olympics is hoped to become a symbol of world peace.” 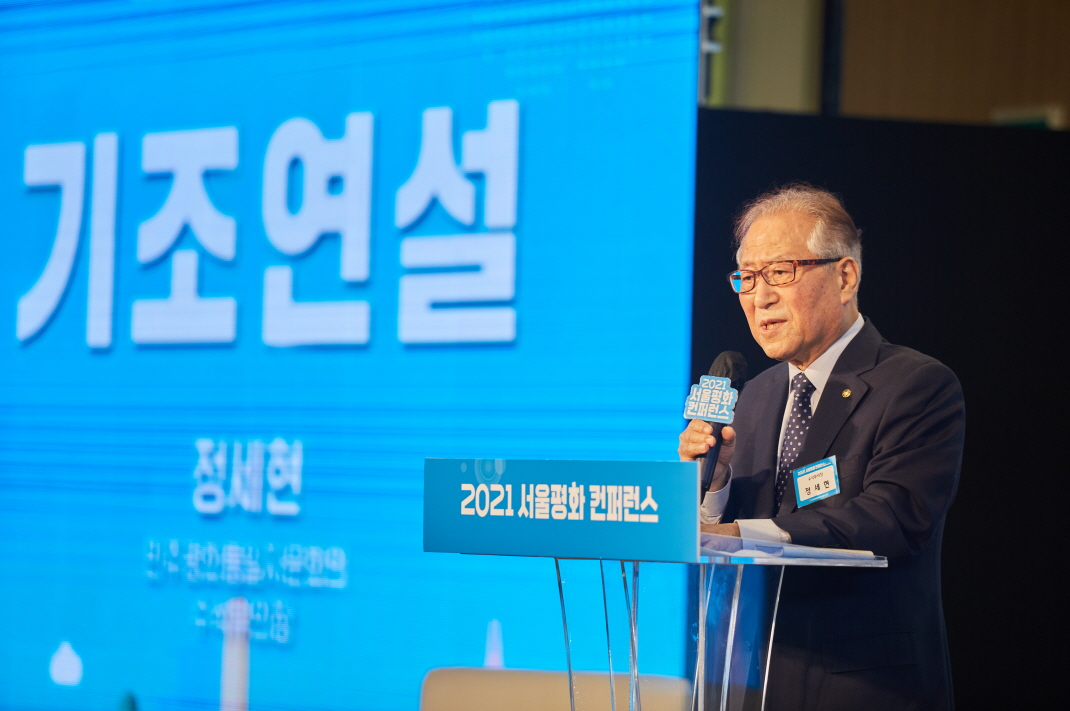 In a keynote speech, NUAC Executive Vice-Chair Jeong said that “in the South Korea-U.S. summit, the U.S. agreed to actively support inter-Korean dialogue, engagement and cooperation, and the U.S. is expected to resume its role as a mediator and facilitator in the development of North Korea-U.S.” He also said that “It is important for the South Korean government to provide the environment for the North to agree to dialogue.” He addded that “efforts to host the 2032 Seoul-Pyongyang Joint Olympics (including the construction of a high-speed railway between Seoul and Pyongyang) will be become a focal point, and that it is necessary to build a public consensus.” 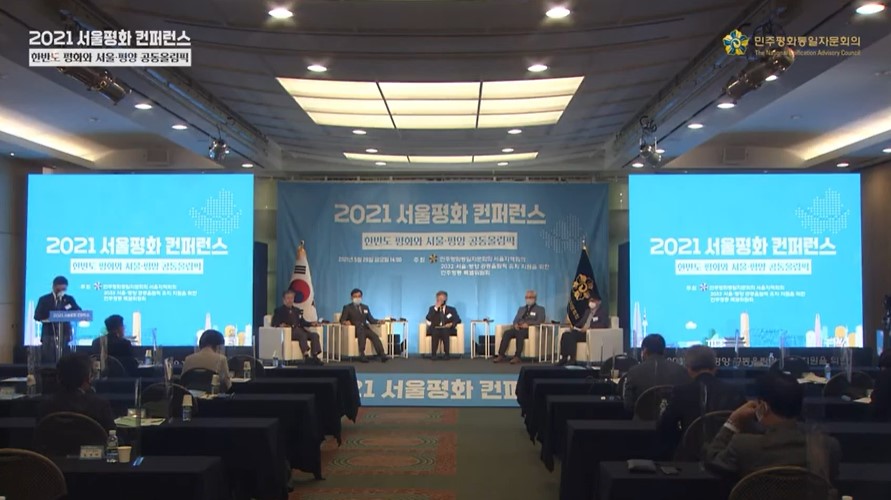 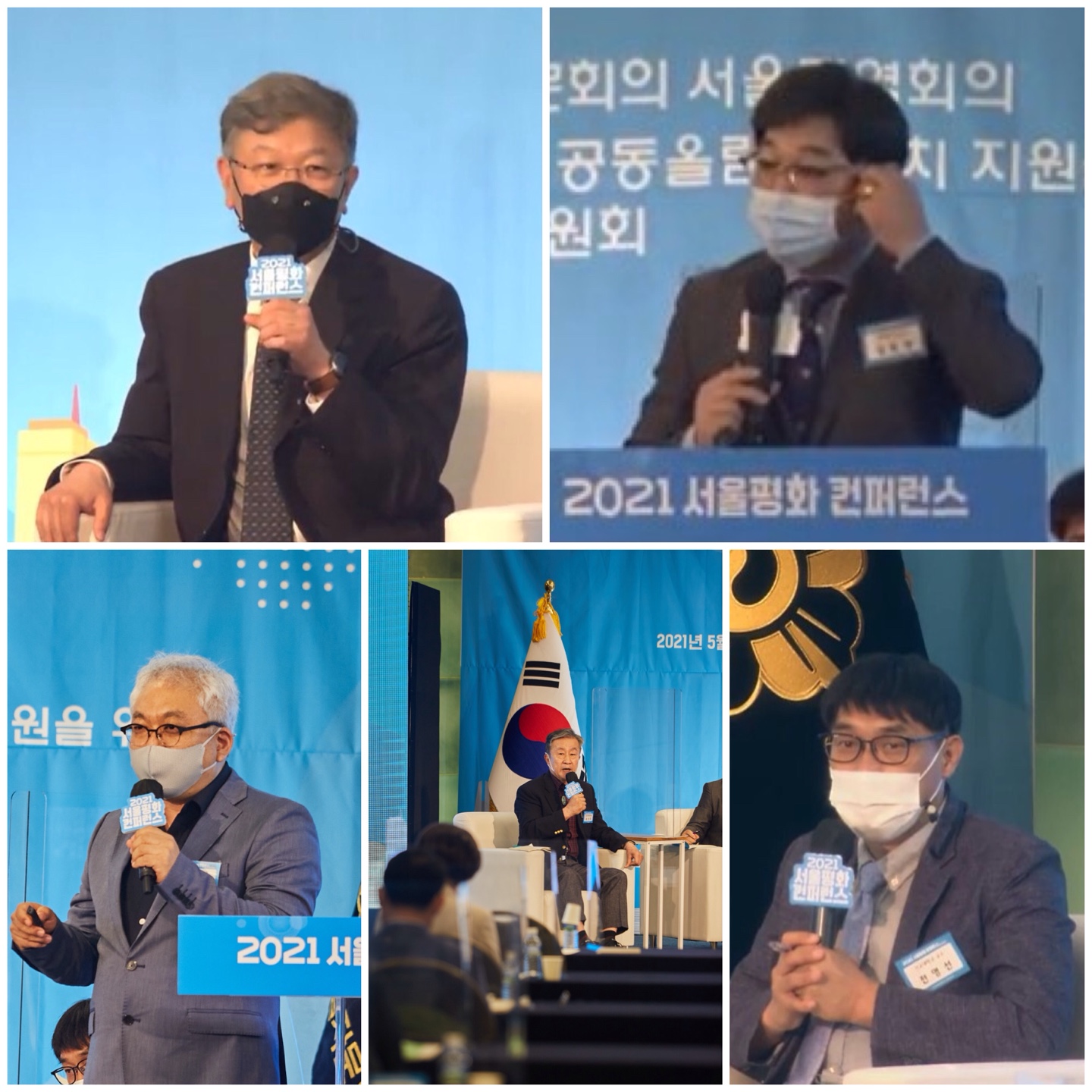 ▲ Professor Kim Dong Sun of Kyonggi University said in a presentation on the theme of selecting a preferred candidate city for the 2032 Summer Olympics and the prospect of hosting the South-North Joint Olympics that “a comparison with competing cities should be made before assessing the prospect of hosting the joint Olympics. Brisbane of Australia was selected as the preferred candidate city by securing strong public support and appealing with optimal climate conditions, coronavirus-free clean zone, and completed infrastructure that meets the conditions to host the Olympics.”


This is why the goal should be changed to host the 2036 Olympics and it is necessary to build infrastructure in North Korea (construction of competition facilities and non-competition facilities), the professor said. Kim added that the government and the Seoul Metropolitan Government should strongly demonstrate their commitment to pursuing the 2036 Joint Olympics and efforts should be made to build public consensus because considerable economic burden is expected.


Kim said that Budapest of Hungary, Doha of Qatar and Northeim-Westfalen of Germany have switched their goal to host the 2036 Olympics. These will eventually become potential contenders for the South-North joint Olympics. Delhi of India and Jakarta of Indonesia are also preparing to host the Olympics, which makes the prospect of hosting the 2032 South-North Joint Olympics not bright, Kim said.


▲ Monoplane CEO Chung Kwan Ho said in a presentation on "Proposal of Strategies to Host the Seoul-Pyongyang Joint Olympics" that "the hosting of the Olympics can achieve the political goal of ‘establishing peace on the Korean Peninsula.’" He also said hosting of the Olympics can contribute to the comprehensive accomplishment of diverse goals, including opening of inter-Korean transportation networks, broad contacts of media and global companies’ investment in North Korea.


▲ Yoon Kang Ro, president of the International Sports Diplomacy Research Institute, said during the panel discussion that “although it was realistically difficult to establish the Inter-Korean Joint Olympic Hosting Committee, the committee should be established to demonstrate the determination to co-host the Olympics to the world. Public support should be secured by emphasizing Olympics’ contribution to peace of the divided nation and by letting the people accept that the cost for Olympic hosting will offset the defense spending and cost for unification in the future.”


▲ Professor Chun Young Sun of Konkuk University also called for “reflecting on the Olympic spirit,” stressing that “it is important to revive the significance of the spirit of hosting the South-North joint Olympics and build a foundation for those in their 10s and 20s to dream about a peaceful situation on the Korean Peninsula.”

The second session was moderated by Kang Young Sik, chairman of the Inter-Korean Exchange and Cooperation Support Association. Professor Kim Ki Seok of Kangwon National University and Hwang Kwang Seok, an executive director of Hope Rail, made a presentation and discussions were made by Lee Dong Soo, head of the support team of the Korean Sport and Olympic Committee in Japan, and Bang Sun Hee, chair of the Public Diplomacy Standing Committee of the China Assembly of the NUAC. 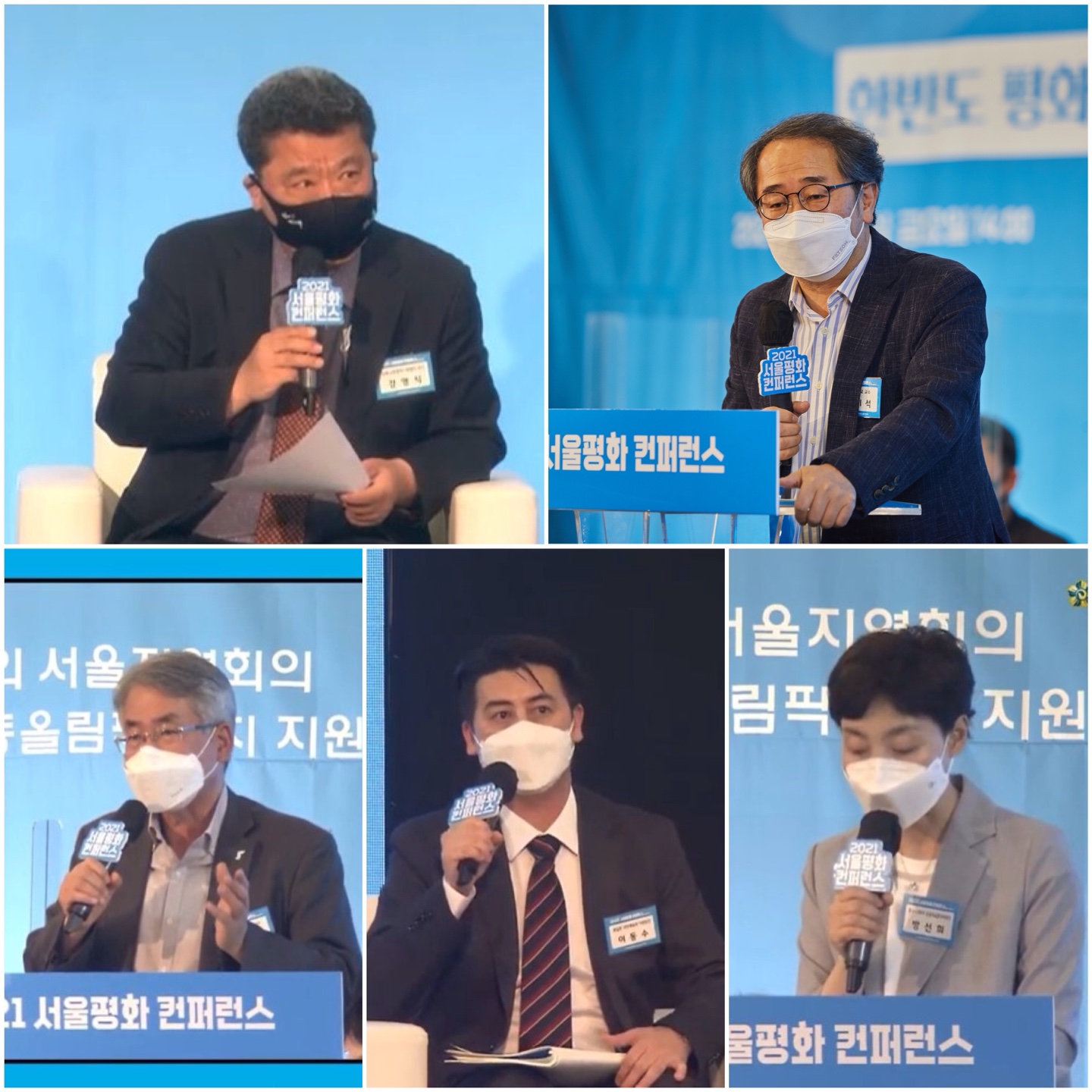 ▲ Professor Kim Ki Seok of Kangwon National University made a presentation on “Tokyo Olympics and Peace on the Korean Peninsula.” He said that “the PyeongChang Olympics started the Korean Peninsula peace process, and the Abe administration's political motivation for the Tokyo Olympics was to show off Japan’s national power and pooling together conservatives to gain public support for constitutional revision.” He also offered his view of the Suga administration’s dilemma over the Olympics amid the COVID-19 pandemic. Prime Minister Suga hopes that successful hosting of the Olympics will help him get reelected. Professor Kim said that “although North Korea has declared its absence from the Tokyo Olympics and there is a strong opposition against the Tokyo Olympics in the U.S., success of the Tokyo Olympics is important for South Korea which pushed for the 2032 Inter-Korean Olympics.”

▲ Hwang Kwang Seok, executive director of Hope Rail, made a presentation on “The Beijing Olympics and the Inter-Korean Joint Olympics Support Train.” He said that his goal is to connect the inter-Korean railway and operate a ‘inter-Korean joint cheering train’ at the 2022 Beijing Winter Olympics to advance peace and prosperity on the Korean Peninsula, promote inter-Korean dialogue and contribute to peace on the Korean Peninsula. He said railway connection can promote exchange and cooperation between the two Koreas and revitalize economic cooperation and thus become a new growth engine for the Korean economy. Hwang said that he hopes South Korea will help North Korea overcome the COVID-19 crisis and the two Koreas will be able to enjoy the Beijing Olympics together by connecting the inter-Korean railroad. The role of the NUAC is important in that context, he said.

▲ Lee Dong Soo, head of the support team of the Korean Sport and Olympic Committee in Japan, reported on the support for the South Korean national team participating in the Tokyo Olympics and briefed about ways to support the successful hosting of the Tokyo Olympics, including the operation of an online Korea House for promoting the 2032 Inter-Korean Joint Olympics.